ARTWORK > Our Long Conversation with the Sun 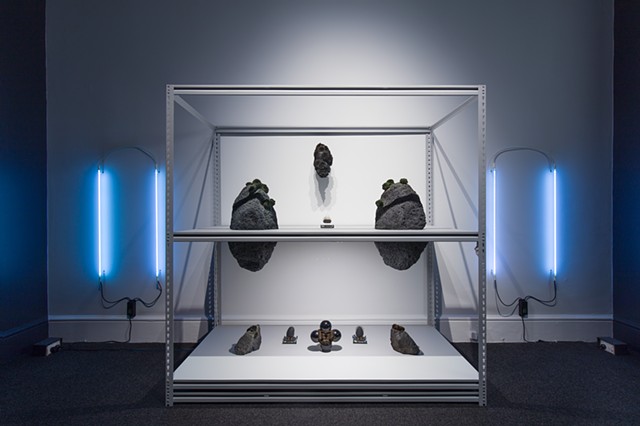 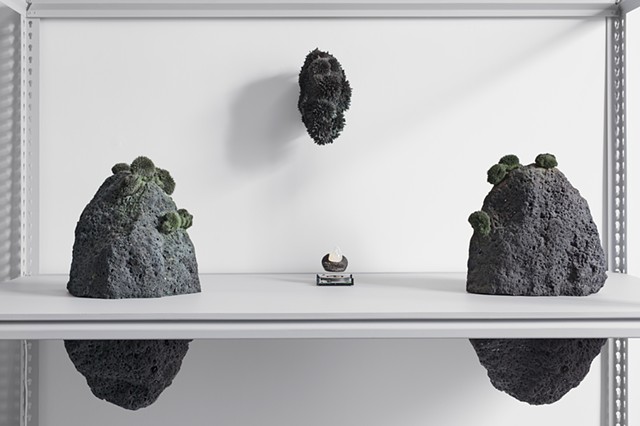 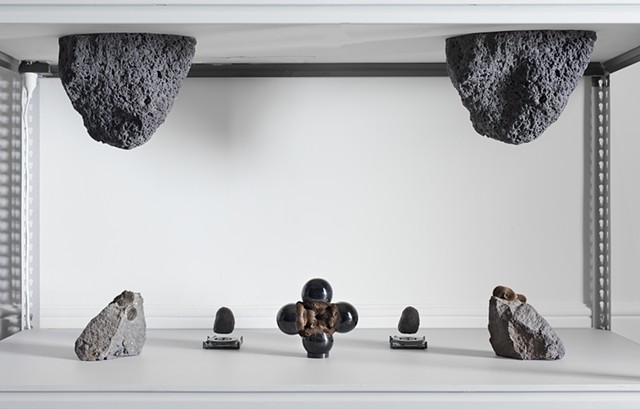 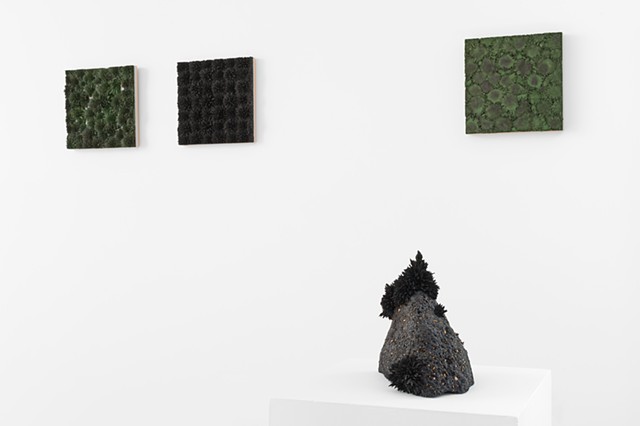 Our Long Conversation with the Sun (install detail) 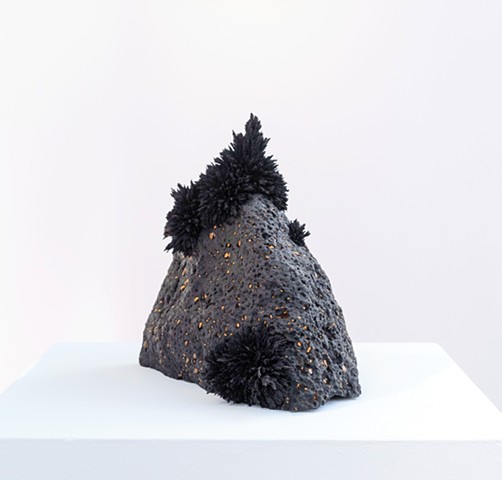 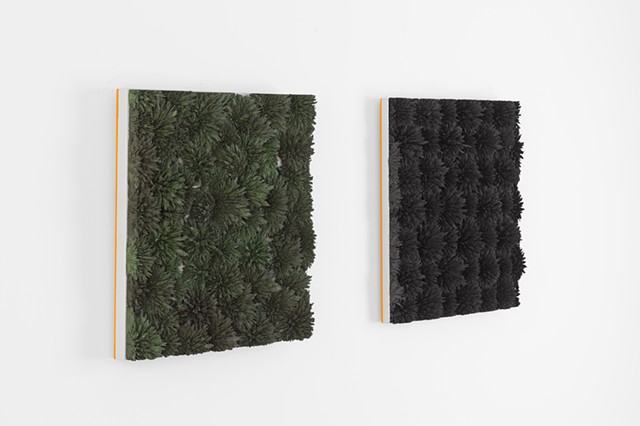 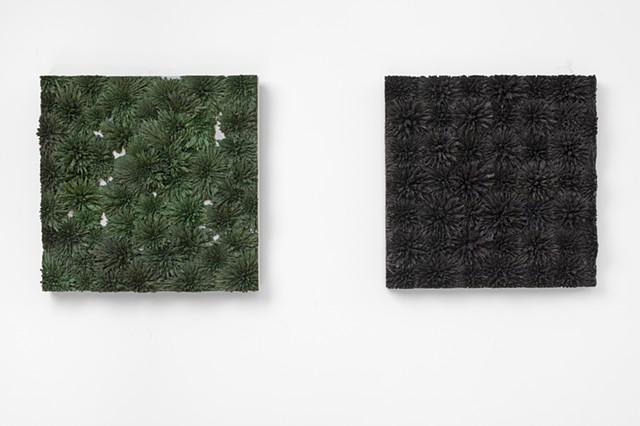 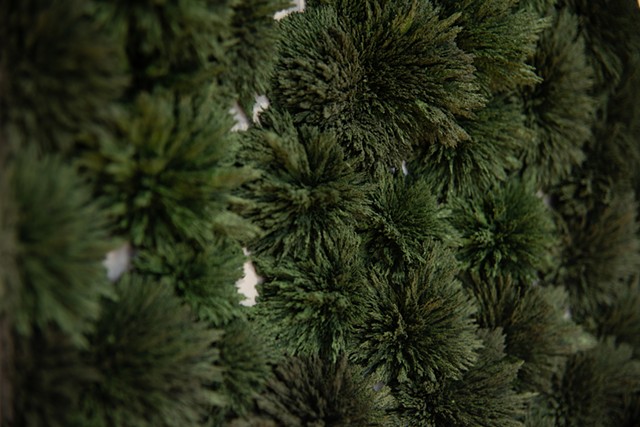 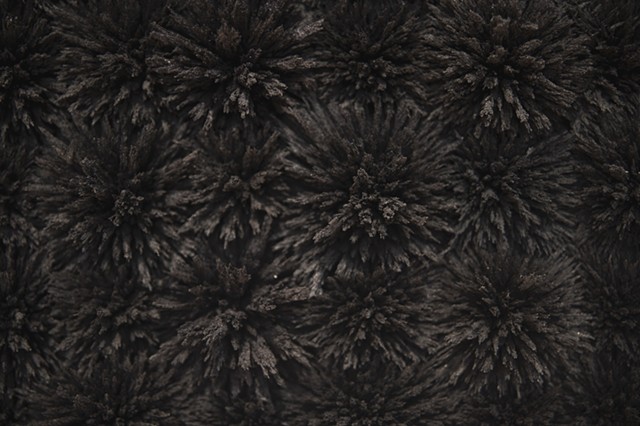 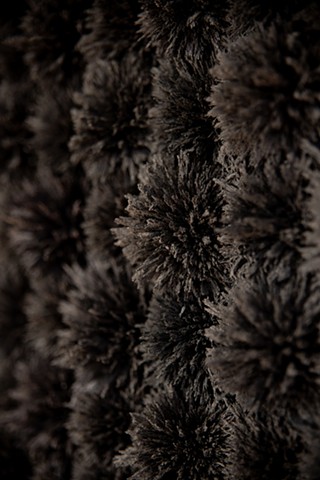 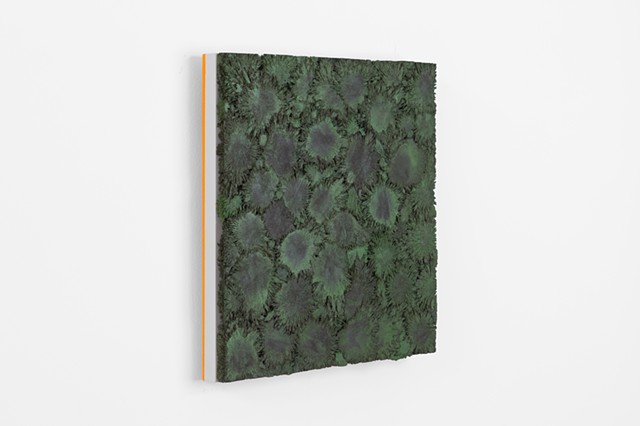 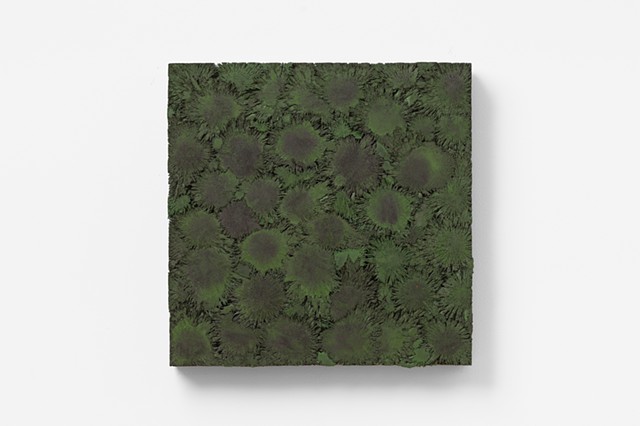 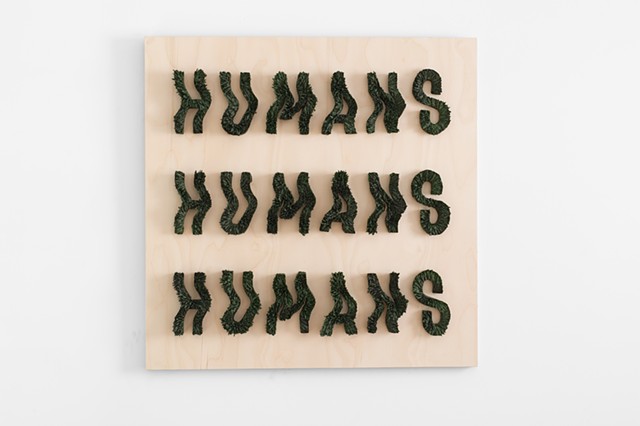 Our Long Conversation with the Sun by Alicia King employs alien forms to signal the asence of humanity through the language of science-fiction, it comprises sculptures formed with iron powder, gravity and resin. Some are displayed on flat surfaces like samples of a foreign ecology such as in Summation of Forces, described by the artist as a ‘landscape of biological metamorphosis’; while others are mounted to resemble formalist paintings. The geometry involved in King’s ecosystem is abundant: gathering round, sharp and rectangular shapes that revel in dystopia. There is a sense of entrapment that permeates these sculptures, as the resin captures a moment in the savage gravitational movement of magnetized iron powder—which springs forth with spectacular energy.

The totality of Our Long Conversation with the Sun is reminiscent of an archetypical scene in sci-fi cinema, where the spaceship’s laboratory holds unearthly organisms within its clinical walls. This is a conversation between our earthly boundaries and the apocalyptic sentiment of yesterday.

Comparative Deletion is one of the centerpieces of the show. Made of iron and resin, it spells the word “HUMANS” three times like a large neon sign. The materiality of the work bears a sense of irony as this mineral is present in all living things yet becomes toxic for the body in high quantities. On the other hand, an iron deficiency mimics symptoms of vampirism (like a human leeching on the planet): paleness, fatigue and malaise. The linguistic repetition also implies a punishing sentence (tsk tsk tsk) that reprehends misdemeanor. Other works are more amorphous, bearing an almost lively, organic appearance. Such is the case of Static Motion, a small sculpture comprised of four spheres bound by gravity that form a sensual cavity at its centre. The anal allusion of this piece springs to mind George Bataille’s The Solar Anus, where he states that “Plants rise in the direction of the sun and then collapse in the direction of the ground”. Humans face this cycle of disintegration with tempest, as the warmest temperatures recorded in recent years continue to spike.

An invisible medium in the show is gravity, which is manipulated by the artist with magnets that pull the iron powder into its fantastical modes while making other objects levitate. For instance, Ellipsis is a kinetic sculpture that employs iron filings and electromagnets to cause an egg-like object holding the artist’s human cells to levitate. The latter spins with wondrous endearment, invoking the magical technologies that permeate sci-fi narratives. Gravity, as a medium of sorts, holds a darker connotation, as it also signposts that which is urgent, significant, precarious. One could also ponder on the notion of attraction and ask whether humans are mysteriously guided by a desire for self-erasure, seduced by a universe of entropy whose centre is a silent nothingness.

It is notable that the cinematic scientist who is often seen tampering with unknown matter is missing from this mis-en-scene. This is how Alicia King centres the human with its absence (like a spectre haunting an inhospitable cabin in a spaceship lost to a black hole), as it conjures a moment in which the anthropoid is the utmost author of its surroundings (the scientist manipulating, taming and controlling extraterrestrial stuff) yet deletes it from the scene of its own making, superseded by larger and more urgent forces. The artist explains comparative deletions as ‘Hypnotic sequences of words that allude to an absent subject. They refer to something implied yet not defined. An absent presence’.

The forms in the exhibition are clearly the engineering of a Homo-sapien (or perhaps a Neanderthal, which according to reddit survives in some of our DNA) who has been liquidated from its own picture. This is our conversation with an uncaring planet that is replying with hostility to the industrial waste that supports capitalism. This is your warning: turn left in the avenue of the past or perish in the roundabout of the present humans, humans, humans.