ARTWORK > Delicacies of the Dead 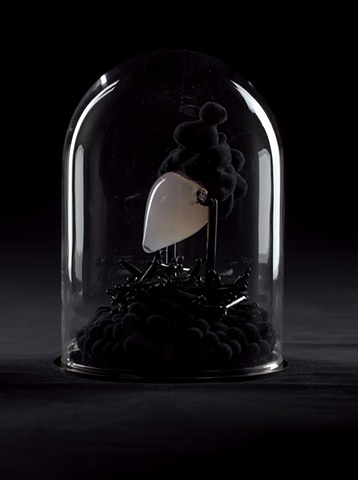 Delicacies of the Dead 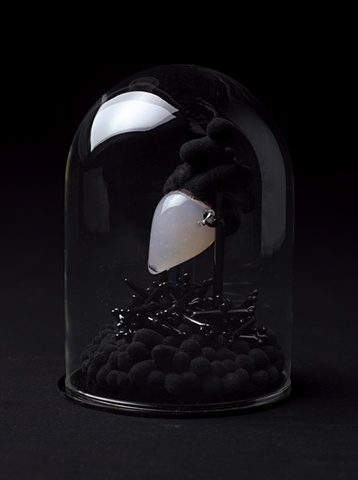 Delicacies of the Dead

CURRENTLY ON EXHIBITION AT THE MONA MUSEUM

Collection of the MONA Museum

In Delicacies of the Dead, Alicia King uses tissue engineering techniques used in biological technologies to transform her own cells and tissue into a contemporary techno-scientific reliquary.

Delicacies of the Dead explores ideas of subjectivity, embodiment and ethics of the body and its materials as modern commodities in medical and scientific industry, through the augmentation of human tissue in sculptural form. The work references traditions of bodily ritual sacrifice through the reliquary motif, encasing human tissue fragments in a microcosm of speckled flesh; cells grown from tissue taken from a biopsy of King’s leg.

The biopsy was performed by a local Hobart surgeon who removed a piece of skin (3cm x 1cm) from King’s leg. King took the tissue to the University of Tasmania School of Medicine and harvested her keratinocyte cells. Over a period of months she grew the cells into tissue membranes to form a suite of sculptural forms. These cells were also grown in a custom made bioreactor, as a living human tissue sculpture that was exhibited with this piece at the Tasmanian Museum and Art Gallery Bond Store for the 2009 MoNA Prize, and later published by the Museum of Modern Art (MoMA), New York, in their publication Biodesign: Nature + Science + Creativity.

In the artist’s words:

“Human dealings with bodily materials outside of the host body are odd and compelling. Generally human material removed from the body becomes anonymous, objectified and considered to be a waste product, though it has incredible financial value as a commodity. When used in industry the individual origins of the tissue are removed and it is used like any other raw material in the factory line, completely devoid of it’s individual, subjective origins, yet newly imbued with miracle properties.

This series of reliquary artworks play upon apparent miracles of biological technology and the idea of science being able to fulfil the mythology of our mysterious existence - of the void, the meta, the unexplainable - ultimately, the future.

Estranged from my body, the cells and tissue presented here are re-embodied in the form of a contemporary reliquary. The significance of the biotech relic — a product of contemporary biological technologies acts as the ultimate faux ’miracle’, such as a relic of the dead which is claimed to bleed or weep, as a sign of the direct power of the ‘creator’, or in this case, the Institution. Just as the egg displayed at Sparta was regarded as a true relic of Leda’s union with the swan—so too biotech relics may appear as apparitions of the wonders of biotechnology.”