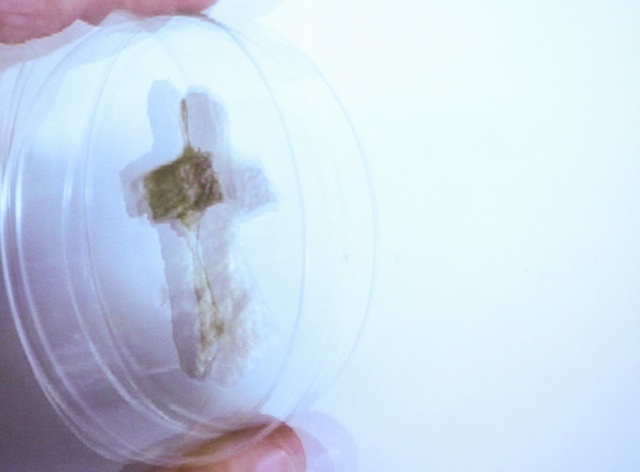 Stop-animation of tissue specimens, from tissue donated by an anonymous surgical donor.

Tissue reliquaries appear of each side of the space, revered as relics within a church or sacred space. The reliquaries frame a video projection of animated footage taken throughout the laboratory process. In the footage, the tissue pieces are suspended in transparent agar, in a petri dish which is held upright, between my fingers. The forms appear to have a life of their own, as they rotate, flickering, between my fingers, morphosing between fangs and crucifix as if possessed.

The presentation of these, once-living, preserved forms also illustrates the continual limitations of our technological expertise in the spectrum of life. Though the work involves processes of growth, the cells inevitably end in death; a transition of the body from a living subjective entity to a thing for the taking/growing/breeding for biomedical capital, or in this case, artistic form.